Focusing on oncology conditions with a high unmet medical need

Asbestos is a mineral found naturally in rocks and soil.  Asbestos fibers are soft and flexible and resistant to heat, electricity and chemical corrosion. These qualities made asbestos very profitable for business and became the material of choice in a variety of products including, but not limited to, roofing shingles, floor tiles, ceiling materials, cement compounds, textile products, and automative parts.  It wasn’t until the late 1970’s that the use of asbestos started to be abandoned in certain countries like Canada, European Union or USA, after the Environmental Protection Agency classified it as a known carcinogen directly and scientifically linked to a number of lung and respiratory conditions including mesothelioma. By that time, however, asbestos had been widely used and was a potential source of great harm to those who came in contact with it.

Despite the fact that health concerns have prompted more than 50 countries to restrict or ban the use of asbestos since the early 1970s, around 150 countries still continue to mine and consume the toxic mineral in alarming quantities, without a strict legal regulation and supported for potent pro-asbestos lobby groups. 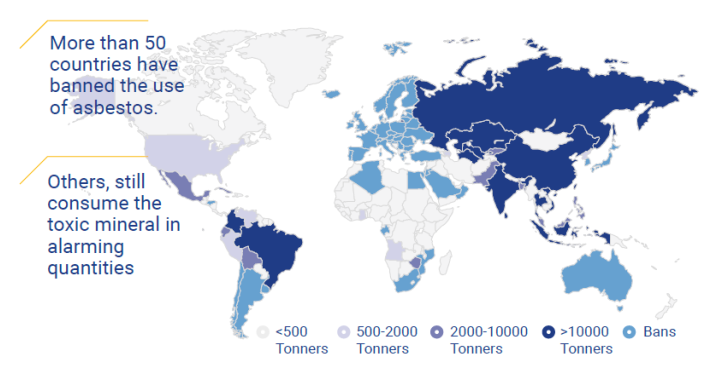 World Health Organization (WHO) estimates that around 125 million people are currently professionally and environmentally exposed of which 10% will eventually develop mesothelioma. Remarkably, in those countries as the EU where the use of asbestos has been already prohibited, it remains still a challenge as there are still many buildings and industrial elements containing asbestos that require removal and disposal. A high cost removal plan that also puts workers and the community at immense risk.

Microscopic asbestos fibers enter in the body once inhaled or swallowed. Once in the body, they never dissolve, and the body has extreme difficulty expelling them. Over years of time, trapped asbestos fibers cause inflammation, provoking damage to the body’s cells and increasing the risk of cancer appearance.

While the term “asbestos cancer” most often refers to malignant mesothelioma, a number of other cancers are also associated with asbestos exposure including lung, larynx and gastrointestinal tumours among others. The Environmental Working Group (EWG) states that asbestosis (a non-cancerous disease), mesothelioma, and asbestos-related lung and gastrointestinal cancers claimed as many as 230,000 lives between 1979 and 2001.